skip to main | skip to sidebar

The Olga 28 has turned out to be a very popular design, but I've had reason to consider a slightly stretched version without the engine well. Some people have asked about a swim step, others wanted a slightly larger cockpit, or a bit bigger cabin. Beyond that, the outboard well works best for smaller outboards (say 60 hp); for larger engines, especially 4-strokes,  the transom cutout gets pretty big. The well also takes a big bite out of the bottom just where you want the planing area.

With all that in mind I've done a couple of preliminary drawings for an Olga 31. The hull is unchanged except that it's extended by 3', and doesn't have a well. One version keeps the cockpit about the same size as the 28 and puts the outboard on the end of the swim step, or pod. The pod isn't an add-on but simply an extension of the hull that is cut down in height. The other version carries the hull out to a conventional transom, with the outboard mounted in a splash well.

The Olga 31 weighs a bit more than the 28 but gets quite a boost in buoyancy from the extra hull length. It allows for larger tanks as well as the option for a bit more interior space if that's desired. I think performance would be very similar.

Drawings haven't progressed beyond what I've posted here but are on the schedule for this winter.

Thanks to Paul Kessinger, and Ton Schoenmakers and Sytse Douna (all builders of the Olga 28) for discussing a transom mount Olga, which encouraged me to post these drawings.

Above and below, the pod version of the Olga 31 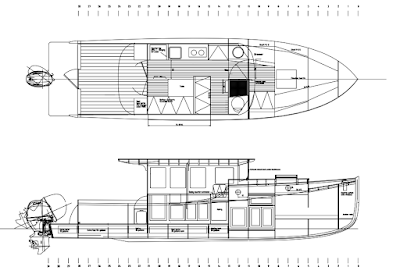 The Olga 31 transom version, with a stand-up head in the main cabin.
Or use the original layout and have a bigger cockpit. 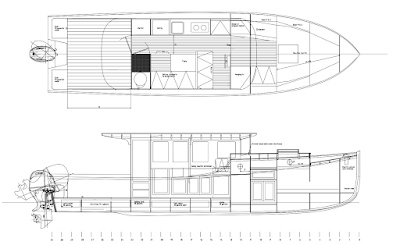 Posted by Mark Smaalders at 8:42 PM No comments: 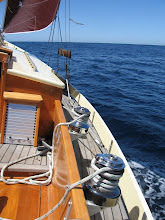